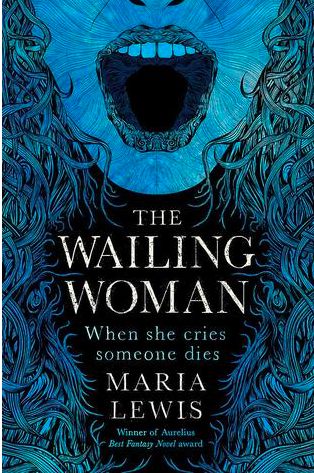 Hello there! Welcome back to Notes and a Novel! My names Maisie from the booktube channel SleepyWiredStudios filling in for your regular host and am here to review The Wailing Woman by Maria Lewis.

The Wailing Woman is Lewis’s fourth book in the interconnected urban paranormal fantasy series, The Supernatural Sisters series, although each book can be read as a standalone. This series follows versions of classic movie monsters in a world where they exist alongside humans and have an organization to keep the peace between species.

The plot of the Wailing Woman follows Sadie Burke a banshee who lost her wail and Texas Contos the son of the man who took it from her, as they investigate a series of mysteries around their childhood home/area. .

Lewis’s writing style has always been straightforward and immersive. The worlds and system are explained and every scene I feel you can imagine vividly. You can also feel the different voices in the POVs which I love.

Maria Lewis is great at crafting badass female heroines and as I’ve followed the series since 2016/2017 each new protagonist becomes a favourite.

Sadie Burke is a mute banshee at the start of the book and her personality shines through the pages and her inner monologue, I loved her sass and way of thinking, which made her an enjoyable voice. Her relationship and banter with her sisters and Texas were great and you got to see many sides of her.

Texas Contos was a character I got attached to along the way, I loved the way he was sarcastic and witty but could also be charming and loveable, especially around Sadie.

The side characters were well developed and I especially enjoyed seeing some familiar faces from her other books.

There was no particular Big Bad in this book unlike the rest in the series, as it was more focused on the characters but the antagonist being Texas’s father and his uncles made for great familial drama.

The Supernatural Sisters takes place all over the globe and in the Wailing Woman takes place the majority of the book in Sydney, Australia and then to London. Maria’s writing lends itself well to the gritty atmosphere and urban setting.

Seeing how certain supernatural communities and species adjust to fit into the human world is intriguing, for example,  the Burke sisters make a living as a crime scene clean up crew as banshees can predict a person’s death.

- A Vibrate cast of characters

- The mystery element was engaging and was fun

- the dialogue was entertaining

- discussions about disability and how that can affect you were great and appreciated.

- This book set up and tied up a lot of threads from other books which were great.

- it focuses quite a lot on the ins and outs of the Askari and the supernatural community, I loved learning more about the history and then Askari in this book.

As mentioned in the characters section there was no Big Bad Villian like the previous books but instead, the antagonist was Texa’s own father and his uncles, and while they were fun antagonist’s, still felt a bit underdeveloped.

If you’re not a fan of straightforward, procedural dialogue then this might be a struggle as it focuses quite a lot on the ins and outs of the Askari and the supernatural community.

All in all, I highly recommend the Wailing Woman by Maria Lewis to anyone who is a fan of urban paranormal fantasy series, badass characters and mysteries. It has an enjoyable story a great cast of characters and an immersive world that I love and adore. I look forward to the next book that Maria puts out and can’t wait to see where the series goes from there.

You can find Maisie over on twitter at @maisie_dickson or on her booktube channel At https://www.youtube.com/user/MariWired92