Susanna Clarke's long awaited second novel is due out in September and I was lucky enough to receive an ARC through my local book shop.

Piranesi is a book that you just have to read, and keep reading until you get to the end. There's no real way to explain the plot because anything I say is going to sound ridiculous or boring, but trust me when I say Susanna Clarke is a master of experimental fiction and surrealist fantasy fiction.
It is a short novel, the ARC copy I had was 244 pages and it was an incredibly quick read.

Like I said, explaining the plot is going to take someone better than me, but what I can tell you is that the main character, who is referred to as Piranesi is a man who lives in a cave system alone. He believes that there have only ever been 15 people in the world, including himself and a man he refers to as The Other.
The Other is intent on expanding his knowledge and uncovering secrets of the universe using rituals that he doesn't explain to Piranesi. Piranesi thinks of himself as a scientist who uses rational thought to explore the cave system and only believes in things he has seen and can prove to exist.
When Piranesi discovers that The Other has been lying and there are others in the world who Piranesi hasn't met, Piranesi begins to doubt The Other's intentions and does his own investigating, leading to the discovery of Sixteen, Sixteen is named because Piranesi believes that they are the 16th person in the world.
The plot thickens as Piranesi struggles to decipher what is the truth, and what The Other has been lying about.

Piranesi is a man, whose age we really don't know at any point throughout the novel. We don't know how he came to be in the cave system that he believes to be the entire world.
The Other is a scientist who uses Piranesi to assist him in his quest to expand his knowledge of the universe and reclaim powers once thought to have been lost in the past.
Sixteen is a person. That's it, that's all you get with that one.

The writing, oh my god. It is lyrical and musical and so incredibly weird. Because it's all told from the inner monologue and journal entries of Piranesi. Having a sole narrator made for a great reading experience as we witness Piranesi lose grip on what he believes to be his own reality.

The writing is a double edged sword. While I loved it, it's not for everyone and I think the reviews and ratings will reflect this when this amazing book is released.

Read it, but only if you're prepared to be utterly confused for 75% of this short book. Then do what I did and wait 24 hours before you rate or review it, because I can guarantee your thoughts will keep spinning about this book for a while after you finish it.

Bearmouth by Liz Hyder, The Starless Sea by Erin Morgenstern.
Piranesi by Susanna Clarke will be released on the 15th of September 2020.
at August 31, 2020

Overview The Guest List takes place over two days, with an alternating timeline between these two days and multiple perspectives. It follo... 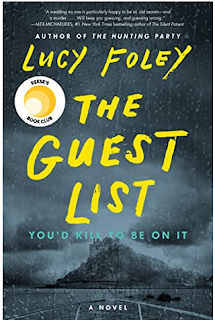