Two "Reviews" in One: Furious hours by Casey Hep and Take me Apart by Sara Sligar

So, I wasn't going to post these two reviews because they're not really reviews.

Long story short, I DNF'd both of these books. For those not in the know, DNF stands for Did Not Finish.

I got both of those books to review on NetGalley and normally I force myself to finish any book I receive from NetGalley so I can give them a fair and honest review but I just couldn't with these two books.

So, I'll address Furious Hours by Casey Hep first. I really wanted to love this non fiction book about the case that inspired Harper Lee to attempt to write her second book. And I sort of liked it? I think?

The thing is, it's not really about Harper Lee at all, it's about a self styled Reverend named Willie Maxwell who has a tendency towards insuring his relatives who later end up dead in suspicious and similar circumstances. It follows his life all the way up until he gets shot at his step daughter's funeral by the girl's distraught uncle. Then the book switches to the trial of Robert Burns, who shot Maxwell in full view of many witnesses but instead of serving a lengthy prison term, he is sent to a psychiatric hospital and released within weeks.

The lawyer who represents Burns at trial is also the same man who represented Maxwell during several civil suits against varying insurance companies who didn't want to pay out on the insurance policies of Maxwell's alleged victims, because Maxwell had numerous policies for these people and it reeked of insurance fraud.

Harper Lee only comes into this book at the halfway point, which is about where I was ready to give up, I read a little bit about why Harper Lee hadn't written much else after To Kill a Mockingbird, her life growing up and a bit about Tom Radney (the lawyer for both Maxwell and Burns) but then I put the book down because I didn't enjoy it. Simple as that. I wanted to like this book because I like history and I like reading about writers and what inspired them but this was about 50% too long and could have cut out a lot of what was written and still conveyed the same information.

There were some pros to this book: The writing despite being overdone is actually very good, Casey Hep excels at setting the scene and making you feel like you truly understand Alabama in the 1950s-1970s, however it's just too much. I was bored for whole chapters, and then I'd just be interested in something and Hep would switch tangents.

The second book I'm going to talk about, I actually can't say much about at all because I DNF'd after less than two chapters.

I didn't get more than 2 chapters into this one because I was bored. It's been done before. The trope of the past meeting the present in this format is overplayed and is rarely done well. I've read other reviews for this book and it also appears to utilise the unreliable narrator trope which only works when done exceedingly well.

I can't rate two books I didn't even finish but I will say that I'm sure there are readers out there who will enjoy the books, but it wasn't me.

Email ThisBlogThis!Share to TwitterShare to FacebookShare to Pinterest
Labels: ARC

Overview This is the first adult thriller by N.V Peacock, who has previously written young adult horror/supernatural books. This debut int... 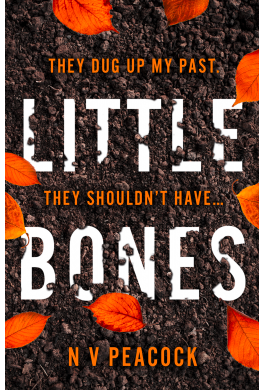