Review: Clap When You Land 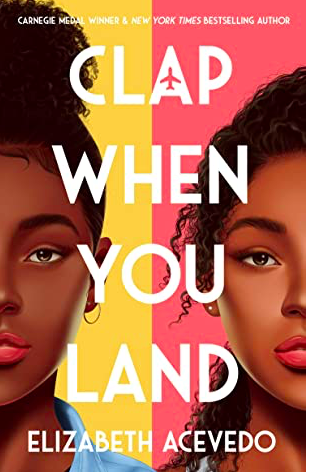 Clap When you Land by Elizabeth Acevedo is an amazing book told in verse. It's the story of two girls who've never met but share the same father. When their father dies their lives are completely changed.

Camina Rios lives in the Dominican Republic and awaits the summer eagerly each year, for her father's return from the US where he lives and works the rest of the year.
Yahaira Rios lives in New York City and spends her life trying to be the kind of daughter her mother and father want her to be.
When Camina and Yahaira find out their father has died in a plane crash things become a lot more complex and the girls seek each other out for both comfort and to vent their anger at the lies their father told. Each girl feels that the other has stolen their father and had no right to him.

This book is told in dual perspective verse and it is beautiful. The writing is stunning, the verse flows so freely that reading the book takes almost no time at all. It's definitely one of those books that I found myself reading in a single sitting and being surprised that I'd reached the ending so quickly. It doesn't suffer from this brevity, in fact that makes it better. Each chapter is told from either Yahaira's or Camina's perspective and each of them have their own struggles they must combat and come to terms with. Both characters are beautifully developed and easy to relate to in a way that surprised me as a white woman from Australia. I don't have the lived experiences of either character but I felt that I could relate to their emotions as teenage girls going through grief. I also listened to the audiobook version for parts of this book while I was doing other things around the house and the audiobook is phenomenal, Elizabeth Acevedo reads one perspective, and the other narrator is just as flawless.

As I said, Yahaira and Camina are two very relatable characters but the side characters are just as relatable. I found myself empathising with Yahaira's mother even though Yahaira finds her overbearing and hard to deal with. Being able to relate to Yahaira's mother added an extra element to this book that surprised me. Perhaps I'm just at that age where I can relate to both adolescents and their parents but Elizabeth Acevedo wrote characters that had conflict but were relatable to the reader which I think is the sign of a great author.
The villain of the story is barely described but that adds to the creep factor. El Cero watches Camina as she goes about her daily life and makes odd remarks to her about her father owing him money. He makes Camina very uncomfortable and she finds herself avoiding things she used to love doing, like swimming, in case El Cero is there watching. When Yahaira finds out about El Cero, Camina and Yahaira have a moment of sisterly bonding that cements their future relationship as family. It's masterfully done and Acevedo's ability to write conflict and high tension shines.

Best of the book

The writing is by far the best part of this book, I adored it. I sought out Acevedo's other books in verse after reading Clap When You Land and loved them just as much.
Here's where I usually put a little criticism of the book, whether that be the writing or the characters or the ending or what have you, but there's nothing I didn't like about this book, at all. That's so rare for me these days, as I have gotten back into writing book reviews, I'm always reading with a critical eye, looking for the things I love as well as the flaws, but Clap When You Land is a phenomenal book that is so well written I couldn't find a single thing I didn't like.

This book is perfect for fans of Elizabeth Acevedo's other works, obviously. But more broadly it will excite readers who enjoy books told in verse, books about grief and family, and stories about young women growing up in less than ideal circumstances. I almost feel this should be compulsory reading in schools as it perfectly touches on how teens feel when their families fall apart or they feel pressure from their parents.
at September 05, 2020