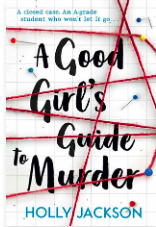 Overview:
This is Holly Jackson's debut book. It's a young adult mystery set in a small town in England, about a supposedly solved murder case. The protagonist Pippa Fitz-Amobi isn't so sure that the police have the right man.
Pippa is a high school student embarking on her final year project, the Extended Project Qualification (EPQ). Pippa believes that Andi Bell wasn't murdered by her boyfriend Salil Singh.
Andi's body was never found, and Salil was found in the woods, having committed suicide. He had sent a text to his father saying he was sorry and then overdosed on sleeping pills.
Andi approaches Salil's brother Ravi and asks if he'd be willing to be interviewed about his brother. While Ravi is initially a bit hesitant due to the fact that the entire town of Little Kilton treats his family as outsiders and murderers by association, he agrees and thus begins our story.
The Writing:
This book is told in a variety of formats, including production logs for the EPQ, interview transcripts, text messages and diary entries. It is a well written, tightly formatted book however I personally found that I was bored until about the 50% mark and then things kicked off with a bang.
The pace increased and the clues slowly unfolded and I found myself completely immersed and unable to stop reading, to the point where I finally finished this book at 1am on a Friday night, having spent the entire evening reading and barely acknowledging the real world. This kind of immersion rarely happens for me and is testament to the fact that Jackson has written a tight, fast paced mystery with twists and turns that I didn't guess at all.
The Characters:
This is where Jackson really shines. Her characters were full of life, depth and felt so real that at the end of the book I found myself almost reaching for my phone to google where they were now.
Pippa is a driven teenager who is determined to both get into a good university and undo a miscarriage of justice.
Pippa's family are sweet, likeable characters who care deeply for each other and support Pippa in her quest right up until the point things start to get dangerous for Pip, and she is forced to conceal certain information from her family. This kind of secretive behaviour by Pip is a deviation from her established character and is handled incredibly well as character development rather than character betrayal.
Ravi is a likeable sidekick with depth, who loved his brother fiercely and strongly believes in his innocence but is not opposed to hearing evidence to the contrary, which creates an atmosphere of doubt and really does make you wonder about Salil's role in the death of Andi.
Pippa's friends lack the depth of the main characters but that is to be expected, however Jackson uses this to her advantage, laying a trail of clues that ultimately lead to the killer in a very unexpected way.
The Atmosphere:
The setting of this book was so dark and eerie while still being able to be light hearted and funny in parts. Jackson managed to pivot between the life of a normal school girl and the dark, twisted path of a killer with a dark need to keep his life together at any cost.
The Good:
The characters and the atmosphere.
The Bad:
The slow start was a bit of a disappointment but I am so glad I pushed through. It was so well crafted that the slow start even makes sense in terms of story telling. It was the story equivalent of a train leaving the station and reaching top speed within 300 pages.
Final Thoughts:
I was stunned when I read the conclusion, even though I had earlier suspected the killer. I discounted the killer not long after and ignored the clues that Jackson left. Reading other reviews, this seems a common theme. I love books that make me second guess my theories to the point where they completely change. This book is probably on the higher age bracket of YA and I would suggest it for ages 15+
For fans of:
The Truly Devious series by Maureen Johnson, One of us is Lying by Karen M. McManus, We Were Liars by E. Lockhart and the Nancy Drew series.
Trigger warnings:
Murder (duh), violence, drug use, under age drinking, sexual assault, animal cruelty.
Keep an eye out on Wednesday 5th August for my review of Good Girl, Bad Blood. The sequel to A Good Girl's Guide to Murder
at July 31, 2020 No comments: